Over the past few years, a monster has been making teenagers and young adults from across the UK and United States dress like they were born and raised on the outskirts of Reykjavik.

We’re not talking about a traditional monster here though, we’re talking about Nanna Bryndís Hilmarsdóttir, the lead vocalist and lead guitarist from Of Monsters and Men. The Icelandic five-piece have had great success in the UK and in the US, as well as selling out gigs and millions of albums across Europe and as far away as Australia and New Zealand.

Despite all of their success, they are still very close to their roots and they still live in Iceland when they are not touring. This means that their Nordic influence is still a big part of them. They have said that their first album was inspired by their home country, and their fashion sense backs this up. 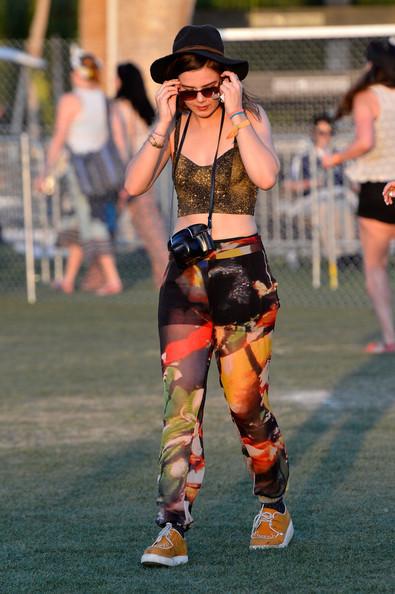 Nanna is probably the most prominent member of the band, as lead vocalist and guitarist, she is also the only female member. She is a fashion icon in her home country and around Scandinavia and you can see from the image from Coachella in 2013 that she loves her bold colours, and it’s no wonder that lastashop.com – an Icelandic fashion retailer – gets a lot of demand for bright, bold designs.

The band’s success has not come as a surprise to anyone who follows the music scene, especially considering how fellow ‘indie – folk’ band Mumford and Sons have taken the world by storm. Following the growth of ‘indie-folk’ bands, there has been a new wave of fashion, mainly for males, but this is where Nanna steps in. She has given females a style to follow along with the genre.

Online there is a lot of buzz around her sense of style, particularly as no one has really seen anything like it before in mainstream fashion. There are countless Tumblr posts and people of all ages from across the globe asking where she gets her style ideas from.

It is also worth noting that the male members of the bands are also heavily influenced by Icelandic fashion, which instantly means they are thrown into the “ridiculously cool” category, as seen in the group shot below. A tuxedo has never looked so casual I’m sure you’ll agree!

Most Viewed Posts In The Last 7 Days

For years and years it was a growing trend to settle down, buy a home…

Summertime and the living’s easy. With weddings, festivals and boating trips added to the agenda,…

Why should you always use comfortable footwear?

No matter whether you’re a woman or a man, shoes are perhaps the most important…

What Should You Pack for a Camping Vacation?

British socks for all seasons

One type of clothing that every person in Britain – man, woman and child –…

How to Look Cool Roller Skating

Whether you’re on quads or blades, there are only ever two looks that come with…

Tips For Motivating Yourself To Get In Shape

4 Biggest trends in online fashion retail – What are the things in store?

What is it that makes a fashion store online ‘perfect’? What are the features that…